Start a Wiki
Alternate Timeline
“I’m sorry, but this is the only way it’s allowed to be.”
This section contains information only relevant before the reboot of the roleplay. Please go to Sylvan Lowell for updated information.

In the forest by Kanerton

Sylvan is the current host for the Element of Metal.

Sylvan is a blue anthro wolf, he wears a blue hood and iron shoulder pads, the hood is connected to a middle armor piece that has a gem in it. He wears clothing that matches his fur, consisting of a long sleeve shirt with 2 yellow stripes running from through the torso area and long pants that has 2 horizontal stripes on the lower leg area. He doesn't wear shoes. As of part XX, he wears a armor all over his body excluding his head. As of part XLVIII, he has bandages over his lower arms and over his head covering his right eye, he is no longer wearing armor. He has two metallic bracelets on his right arm.

Sylvan seems to talk in a fairly seriously most of the time, while he's doing this, he doesn't put much emotion, this easily hides his thoughts from everyone. He talks in a calm tone when trying to get people to make deals with him. For a wolf, he's fairly civilized, when he's not fighting of course. He tries to help the people in need, although he has some form of hatred towards bandits. He also won't believe anything that has no logic or proof to back it up.

“Would you rather: A. Get crushed to death or B. Get poisoned to death?”

Sylvan had unlocked his powers at a fairly young age, this gave him lots of time to practice it throughout the years of his childhood and teenhood.

Sylvan is shown to be able to control, bend, compress and levitate almost anything metal related.

Unlike "metal regeneration", Sylvan can only make certain amounts of certain types of metals in a short burst of time, if he makes too much metal, this ability will be temporary disabled for about five hours, if he constantly goes over the limit every five hours, he will lose consciousness, this could be lethal after continuous strain. After the most recent metal elements rule change, Sylvan can now only make Tungsten, Titanium and Platinum since those are the metals that he is most comfortable with before the event.

So far Sylvan can only make alloys that are made from 2 metals, he doesn't seem to be able to make alloys out of 3 metals.

Metal Sense is an ability that many hosts of the metal can use. These are the levels of metal senses that he can trigger:

Sylvan is able to create metal golems and control them at will, although, they're practically useless when Sylvan is not controlling them, as they are not linked with mind or life yet. Sylvan is also able to summon miniature named golems, but this drains a lot of his energy. He currently has 2 golems on him right now that are recoiled as bracelets so he doesn't have to go through the trouble of summoning them. They are

“Locked and definitely NOT loaded.”

These are abilities that were locked during the recent metal elements rule change.

He has lost access to the T3 and T4 metal sense.

The ability to create any known metal at will. This ability is permanently lost for all metal elementals.

He lost the ability to change the type of metal.

Sylvan is shown to be able to fight with a sword with little to no errors. He prefers to use the basic sword over any other ones, but he'll use a rapier if he wants to be precise.

“Why am I doing this if I could make one in seconds?”

Sylvan is shown to have some blacksmithing experience

—Sub after completing his weapon

Sylvan is shown to be able to tinker with objects. As he gave his sword the option to ignite in flames at will, mostly to blind people.

“So I'm supposed to get zapped?”

Sylvan is a walking lightning rod, the element lightning can easily beat him in a fight. (And sylvan doesn't know how to make plutonium)

“Plans are for losers... who succeed more often than me.”

His "improvise" strategy can easily be his downfall sometimes, he can't always rely on improvising.

—Sub when confronted about caretaking

Growing up, Sylvan has killed almost all his pets in within the first 2 months, he also almost got his childhood friends in danger too.

Sylvan was born and raised by his birth parents for the first few years of his life. At a very young age though, bandits attacked his parents, causing him to awaken his metal powers. Unfortunately he could not save his parents. After that event, he lived on the streets, usually eating bread and drinking milk to fulfill his dietary needs. One day, he came across a man named Benjamin Steelington who dropped his watch without noticing. Sylvan took the watch and thought of selling it, but after some thinking, he gave the watch back to the man. They had a short conversation that ended with the man asking for Sylvan to go live with him.

During his stay with Benjamin, it looked like the gentleman had raised him with care just like his own child, although Benjamin tends to be very busy most of the time and isn't really home. Despite all this, Sylvan has another person taking care of him, Benjamin's butler, Derfla.

He attended Ironberg's local school. He wasn't really invested in his educations, therefore he never strived for good grades.

He is Sylvan's adoptive father. Sylvan respects him highly, treats him like a real father and knows that if it wasn't for him, he wouldn't have been alive.

Benjamin's personal butler, he has been taking care of Sylvan since the day he was adopted. Sylvan appreciates his effort and has a much stronger relationship with him than Benjamin, due to the fact that Benjamin travels often and isn't usually home.

Sylvan mostly trusts Sean in his dreams, although sometimes he questions Sean's way of training and sometimes describes them as "dodgy".

Jennifer is Sylvan's girlfriend and childhood friend, whether they're still in a relationship or not is currently unknown.

It is unknown why Sylvan is even friends with him in the first place, since he mostly has a negative attitude towards him.

He is friends with him and they're on good terms. Mostly from the empathy he has for him

Sylvan is currently fine with Falaos. Although he finds Falaos to be quick-tempered and irresponsible person due to leaving the responsibility of his own sibling on someone he barely knows.

Sylvan considers Hugh to be an acquaintance from all their pleasant conversations, he is waiting to make a joke where he over-emphasizes 'time' while introducing Hugh to someone.

Sylvan doesn't seem to mind Dark that much.

Sylvan considers Momo as an acquaintance. Although, he doesn't enjoy knowing the fact that she can induce headaches on him just like her cousin.

Sylvan dislikes Liam's creepy nature, he keeps a close eye on him incase he does something extreme.

Sylvan has barely talked to Mira.

Fionn's manners reminds Sylvan a lot about Derfla's nature, he suspects that Fionn was once a butler or atleast something similar. He appreciates his effort in helping him while he's tired.

Raole has taken a liking to Raole, mostly from the conversation topics that he brings up.

Sylvan despises Jitx's train of thought and considers him as an impulsive individual. 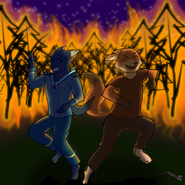