Hugh Brown is an anthropomorphic bunny, approximately 20 years old. Thanks to a golden pocket watch his father gave him, he is able to control his power, the Time.

Hugh is quite normal in height, but his one-feet-long, thin bunny ears make him appear much taller: about 6'9'' when they are straight up.

He has grey-ish brown fur, safe for a white tail and paw-hands. Hugh's attire consists of a light-colored shirt covered with a tailored vest, and long dark pants matching it.

Hugh is most of all jovial, but easily scared. He tries to be very aware of what's going on around him. His keen senses make him always on guard, even if he lets himself get distracted pretty easily.

He is quite charming, yet really unsure about himself. He is, however, obliging and reliable to the few friends he has. He'll be honest with them, and do everything he can to save them, even throwing himself into danger for them. Hugh absolutely believes that being polite with people provides more help and brings many more solutions and less problems than being rude, and that's why he will always do his best to greet, thank and compliment people around him.

Being the host of the Element of Time, Hugh knows most of the time when and where to stand in place.

Not considering himself as powerful, he tries to stay behind the lines, letting the others do all the work. He is conscious he could help them a lot, but doesn't know how for now... 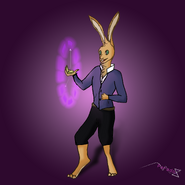 Hugh trying to look interesting - Most accurate ref (by Para)

Hugh spending some... time with himself (by Para) 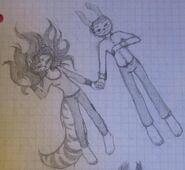