Start a Wiki
Stub
“Time’s told me all about it.”
This page is a stub. In an ideal world, it would have a lot of information on it, but it doesn't. It needs help, and quick. You can help out by adding to it.

TheSecondEdgeOfTheBlade
Are You Freddy For Ready

Aria Harss was the host of the Element of Soul, and as such, was referred to simply as Death.

Death was described as a shorter, plump woman. She has dark blue eyes, and black hair.

Typically she wears dusty blue clothing, most notable of this is her shawl.

Death was an extrovert, and was always up for some good-natured fun. She was not afraid of pointing out someone's flaws, as long as she knew that nobody was going to get emotionally hurt by it. If she was beat in a battle of wits, she was quick to recognize this and stop.

Death was in a romantic relationship with Ivan Angora. The two died together. 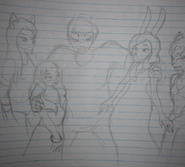